Dr. Xiaosheng Bi was raised in the countryside near Xian, China, an area that was China’s ancient capital for centuries and is replete with traditional Chinese art and culture. After studying graphic design, Xiaosheng worked at the Xian Craft Art Research Institute where he traveled throughout China to study and document classical and folk art. In 1989, he was admitted to the Ceramic Art Department within the College of Art at Qinghua University in Beijing, China where he earned his bachelor’s and master’s degrees and then taught ceramics for eight years. In 1997 Xiaosheng immigrated to the United States and soon established himself as a ceramist and teacher in Chicago. In 2004 he moved to the Washington, D.C. area and now lives in Rockville, Maryland with his wife and young daughter.

Dr. Bi will talk about his work, and will discuss plans for the tour of China that he will lead for a group of potters in 2019, including the tea pot workshop included in the trip.

MP members who would like to participate in the fall 2018 juried exhibition should bring your work to this meeting for in person jurying. Our juror this year is Ray Bogle, who will also give a presentation about his work. He describes his journey with clay: 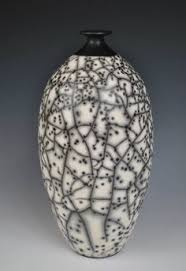 I’ve worked with clay since I was a senior in high school and had no idea how clay would affect my life. I thought it was just a class that was going to get me 3 more credits toward graduation? Following high school, I enlisted in the Air Force where I spent 20 years fixing airplanes. While in the military I continued to “play with clay” and in 1984 got my first potter’s wheel. I taught a few classes, sold work at an occasional show, and lots of people received pottery at Christmas time. Also, I began exploring raku and made LOTS of mistakes while learning this technique.

Upon retiring from the Air Force I became an “I.T. Guy”. Around this time, I began to teach more classes, became a member of a local co-op Gallery, and began teaching classes at AnnMarie Gardens in Solomons Island, Maryland. In 2010, I was able to build a full studio and have used this to further my own studies and share with others. In 2015, I built a small gas kiln and continue to explore reduction firing techniques. I’m hoping to become a consultant “I.T. Guy” in 2019 where I will have more control over my schedule and can fill time with additional teaching and workshop opportunities.

Laurel Lukaszewski is a Prince George’s County, Maryland based artist who creates installations and sculptures primarily from clay. Her work is influenced by a love of rhythms and patterns found in nature and her study of and work with Japan over the past three decades. In 2014, Laurel founded White Point Studio in Mt. Rainer, MD. She describes her work: 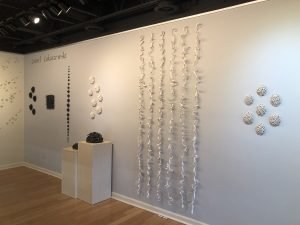 I am fascinated by repetitive forms found in nature, in patterns that seem to make sense out of chaos, and the rhythm of objects as they move through time.  I enjoy the poignancy that exists on the edge of celebration and loss, capturing the nostalgia that occurs when one suddenly experiences something long forgotten.  Most of my installations reflect the notion of a moment captured in time, a liberal nod to a concept originally from the Japanese tea ceremony, “ichi-go ichi-e,” which translated means something close to “in one lifetime, one meeting” or “once in a lifetime.”

My works, whether created from extruded clay forms resembling three-dimensional line drawings or individually sculpted objects that multiply into the thousands, are often installed on-site in response to their surroundings, taking advantage of architectural elements or reacting to the way shadows play upon the work. When the works are moved, they are dismantled and if reinstalled, will be configured differently to respond to their new space.  For me, this mutability is a fascinating and important aspect of the work, realizing that it will only exist as it is in the present.

NO MEETING IN DECEMBER 2018

Hunt Prothro studied with Marguerite Wildenhain at Pond Farm, CA, during the 1970’s, and works primarily in porcelain, using thin washes of stains and underglazes over a textured and sometimes manipulated form/surface. Each piece represents a specific, authoritative, yet ambiguous point in time and space, yet each piece tells a story, an ancient story of beginnings and endings with the recapitulated density of material memory, and the suggestion of consummated desire. Physicality matters and heft is important, yet the work remains weightless, like a bird leaving a nest, at the point of a transient singularity, where touch pushes back again. 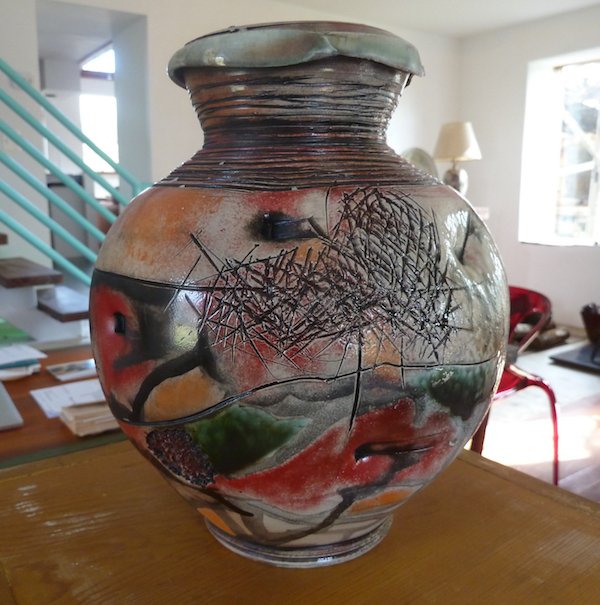 Hunt Prothro lives in Washington County, Maryland. He received a BA in Theology and Literature from Hanover College, Indiana, in 1971. His work is included in the National Museum of American Art and he has received two Maryland State Arts Council Individual Artist Awards, in 1999 and 2002. In 2006, at he delivered an NCECA talk on French cave paintings, entitled: Notes from the Paleolithic Project. In 2007, he gave a lecture entitled The Onomatopoetry of Desire, also on Paleolithic art, as the NCECA Special Speaker to the College Art Association and in 2008 he an NCECA paper focused on the Renaissance and 20th century Surrealism entitled: Accommodations of Desire. His work was featured in the March, 2008 issue of Ceramics Monthly magazine. Studio Potter magazine published the essay: An Incident in Class in the winter, 2009 issue and in October, 2010, he was a moderator/presenter at the critical theory conference, Critical: Santa Fe, which he also helped organize. In 2011 he started a large architectural project, including the building of workshop spaces for students at his property in Rohrersville, MD, and for a few years he was not making work for sale. In 2017, he started firing with the Monocacy River Pottery group, and his most recent work, once again being shown and for sale, is from that wood fired kiln.

Jordan Taylor was raised Quaker in the Midwestern US, and after undergraduate work at Earlham College, Richmond, IN, apprenticed for three years with Master Potter Mark Skudlarek. In 2002 he established his own studio in rural Northeastern Pennsylvania, based on wood fired, functional ceramics made from indigenous clays and glaze materials. 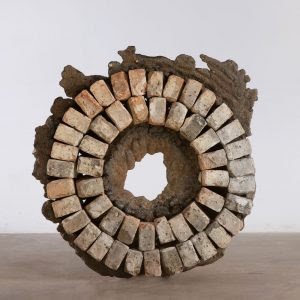 His recent work has included large scale public installations, residential design of earthen walled houses, and citywide charitable events. He is an avid whitewater kayaker and open canoeist and his esthetic sensibilities are informed by fluid dynamics he encounters in immense river rapids, like on the Ottawa River in Ontario, Canada, and in the thermodynamics and venturi forms of natural draft kilns. Taylor completed his MFA in 2014 at the Rhode Island School of Design. There his thesis work investigated Ceramics as a revolutionary act in the form of an architecturally scaled public art proposal for Downtown Providence, RI.

Jordan’s passion and current work concerns race. He recently spent 2 years on the South side of Chicago working with Theaster Gates on neighborhood stabilization. He currently teaches Art at Sandy Springs Friends School. Jordan Taylor was a Short-Term Resident Artist at Clayworks from November – December 2018.

Jayne Shatz has organized a trip to the Freer Gallery with a curator to view and study several ceramic pieces that are in storage in the basement of the Freer Gallery. This exciting event allows participants to choose a ceramic pot they want to examine by going around the entire storage collection and picking a piece. This is fondly called “shopping”. Once you have chosen your piece, the curator takes it out of the storage unit, and places it on a large table. After all have been collected, the participants sit at the table and have a chance to hold, view and pass around all the chosen pieces. The curator directs the group on how to handle and pass the items.

The group is limited to twelve people, two places already chosen for Jayne and her guest. Sign up will be first come, first served. Jayne will present a Power Point presentation at the March meeting, showing the membership a previous storage visit to enable them to have a better understanding of the day. The Freer can be accessed by the Smithsonian metro stop, right across the street. After the visit, people are on their own to have lunch or go to another museum of choice. You can get light lunches at the Castle next door. 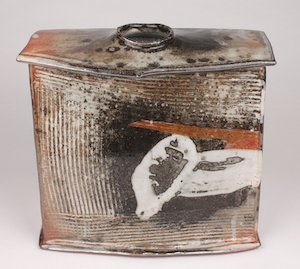 “My vessels are evidence of persistent inquiry, and the development of new aesthetic principles and processes through investigating the relationships involving the physical nature of clay materials, form and compositional design, and the ceramic process.

I utilize the radiant energy of fire to engage with, and decorate the surfaces of my vessels. This interaction between atmosphere and material is unpredictable, and provides endless investigation of colliding randomness with structure, challenging my ideas of control. These vessels become individual artifacts capturing and forever displaying the alliance between process and material.”

We will meet at Chris Landers’ house for a potluck dinner from 1-4pm. In case of rain, the date will move to May 26, 1-4pm. The address will be included in the May newsletter.