Please come with a pot that represents something new or out of the ordinary for you, or that required some problem solving or a new direction that you engaged in recently. We will put these on the table and talk informally about the pieces during the break and after, and mingle with each other as we welcome ourselves back.

Kathie Grove is an art teacher, ceramic artist, and mother of three. Her children are the inspiration for the work she makes. Her work begins with something that represents one or more of her children. She then explores ways in which to connect that element or symbol to her work. She is interested in the use of negative space, juxtaposition of dissimilar materials, and surface manipulation. She uses a variety of techniques including wheel throwing, slab building, and mixed media sculptural techniques.

Kathie Grove has been an art teacher for 23 years. The first 10 years of her teaching career were spent as a middle school art teacher. After teaching middle school she transitioned to her current position as Department Chair and Ceramics and Sculpture teacher at Bethesda-Chevy Chase High School. Kathie received a Bachelor’s of Science degree in Education and a Master of Arts degree in Curriculum and Instruction from the University of Maryland. She credits fellow teacher, Nancy McIntosh with her early development as a ceramic artist and Ceramics teacher. Since her early experiences, she has continued to search for new places to learn having attended Towson University and taken numerous workshops with professional ceramic artists. She is currently working toward a Masters Certificate at Hood College.

The origin of my design explorations have a connection that is close to my heart.  My children are the catalysts for my work.  Creating connections with my children by incorporating elements that speak to who they are is where this work began.  The rocks and shells were inspired by my daughter the collector.  The textured surfaces are made with stamps that my two sons created.  By using my children as catalysts, I have been able to develop concepts for work that are interesting to me and connected to them. 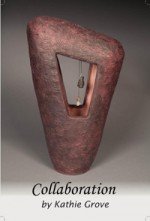 The sculptural forms represent exploration into the use of negative space as a focal point. They are made on the potter’s wheel and then altered. Beginning with a closed form and making decisions about the shape, size, and placement of an opening and how it will interact and impact the whole work is exciting. Incorporated into the sculptures are natural objects that are from my daughters collections. The stones and shells are framed in the sculpture as objects of value. The value comes from what my daughter saw in them that caused her to pick them up and keep them.

Manipulating surfaces has been another area of investigation for me. Using both my sons stamps as directly or added and altered allows me to create a connection with them. Making tea bowls has given me an avenue to explore texture, proportion, and form together. Both boys are interested in creating their own art and have helped me by creating original tools for making texture.  My hope is to have them create tools periodically as they grow into adults so I have representations of them over time.

My children inspire me. By looking for something to incorporate into the work that speaks to who they are they become a part of it. This work captures a glimpse of who they are now. In the future, I plan to be able to capture them as adults in new ways.

As a mother, I nurture the development of my children. In turn, my children nurture my growth as an artist.

She will talk to us about what distinguishes the Sogetsu School of Ikebana, and specifically about vessels, and the artist’s response to them when considering the Ikebana arrangement.

Natalia has been a potter and Field School Pottery and Sculpture Instructor for well over 35 years. Although her work has essentially been functional and thrown on the wheel, she has worked on commissions for indoor and outdoor installations. 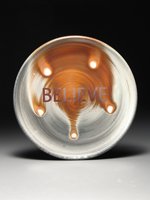 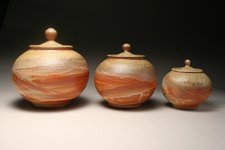 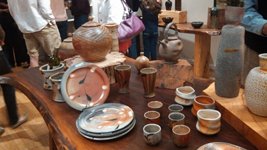 Jim Dugan is originally from West Chester, PA a suburb of Philadelphia.  He attended High School at West Chester East H.S. where he concentrated on drawing, painting, and sculpture.  It was not until his second year of college at California University of Pennsylvania that Jim first touched clay on the potter’s wheel.  It was not love at first touch, but it was the beginning of many years of dedicated practice in the making of things as well as the methods to fire these things.

Since graduating college Jim has spent his time teaching and working primarily at not-for-profit ceramic arts organizations.  The first of these was Touchstone Center for Crafts in the Laurel Highlands of southwestern PA, where Jim lived, studied and worked for four summers during and after college.  During this time Jim had the opportunity to assist in the workshops of many nationally and internationally recognized artists, a learning period which he regards as the most important of his life.

Following his time in western PA Jim moved to Vermont to become the Head Technician at Vermont Clay Studio.  It was a very productive 5 years, but unfortunately due to financial reasons Vermont Clay Studio had to close its doors in 2004.  In 2005 Jim Dugan moved down south to Baltimore to become a Resident Artist and Wood Kiln Manager at Baltimore Clayworks where he also teaches classes and exhibits work.

The work I am making now is intended to highlight what I love about wood fired pottery.  It is intended to be simple, strong, and humble.  I am leaving large broad areas of slip or raw clay for the fire to leave its mark on. Wood fired pottery is often accused of being serendipitous in the nature of its surfaces, and subtleties of the fire’s markings.  While I cannot predict exactly what I will find when the kiln is opened I am taking great care to create the set of circumstances needed to achieve the color ranges and surfaces that I want.  I am interested in how my forms will interact with the fire and it often takes a great deal of restraint to just let the fire do its work. 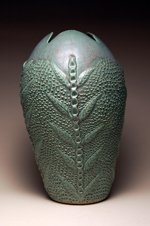 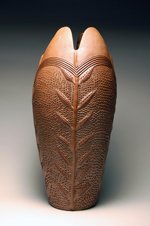 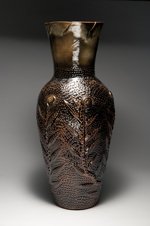 Samuel Wallace is a traditional Jamaican potter who learned to make pots with his extended family in the backyard pottery sheds in rural St. Elizabeth parish. Wallace became a resident artist at Baltimore Clayworks in 1993, after he found the organization in the yellow pages while looking for kiln rental. He was, at that time, producing highly decorated work of exquisite beauty from native Maryland stoneware gathered near Memorial Stadium in inner city Baltimore.

In the ensuing year, Wallace began to teach his ecologically harmonious way of pottery making to others, and with the support from the Folk Arts and Children’s Programs of the Maryland State Arts Council, conducted several highly successful school residencies. By 1998, Samuel Wallace had led 28 school residencies and had been a presenter at the National Art Education Association Conference. In 1995, he was the centerpiece of a Baltimore Clayworks residency project, From the Ground Up, which placed Wallace for one month each in four of Maryland’s most rural counties. He also presented a workshop for the New Hampshire Potter’s Guild, and exhibited his work at Philips/Exeter Academy in Exeter, New Hampshire. Wallace was also a featured demonstrator of his techniques at the National Council on Education for the Ceramic Arts conference in New Orleans in 1995.

He has been artist in residence at The Village of Arts and Humanities in inner city Philadelphia and at Reynolds Homestead Art Center in rural Crietz, Virginia, both through the Artist as Catalyst residency program of the Mid-Atlantic Arts Foundation. For five years, he taught the after school and summer art component for Clayworks at the McKim Community Center in historic Jonestown, as well as the Saturday Bright Starts program for the Mayor’s Advisory Committee in Baltimore City. Furthermore, he has conducted clay classes at School 33 Art Center in South Baltimore and at John Eager Howard Recreation Center in the Reservoir Hill neighborhood of Baltimore City.

In January 2015, Wallace led a group of his Baltimore students on a cultural exploration of his hometown in Jamaica. He shared stories of his early influences and arranged for several outings, including demonstrations and in-depth tours of his clay mentor’s studio and that of another clay artist in a neighboring town.

Wallace continues to teach and exhibit his work largely in a residency format, while a resident artist and employed as technician at Baltimore Clayworks. 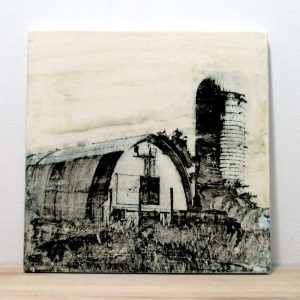 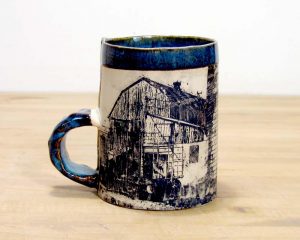 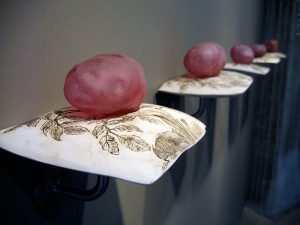 Megan Van Wagoner is an artist who’s work takes many forms. She has produced functional clay wares as well as mixed media sculpture and large-scale installations. Her interest in narrative informs all of this work much of which is representational in nature.

Megan’s recent body of work, “Growing Dilemma,” considers the changing value placed on agricultural land and it’s products. Through the artifacts of it’s production she explores how we value the inputs and outputs of the land. Megan grew up in Ohio spending weekends on dairy farms and amongst rolling fields of corn. Watching the landscape change as a response to changes in agricultural practices has made her consider our culture’s expectations for food production and land use. This is reflected in the sculptural objects created in the likeness of known artifacts and those that are artificial.

A large-scale installation of Megan’s collaborative project “Saturated with the Subconscious” was shown at Flashpoint Gallery in Washington, DC this past July. This project featured 27 full-size clay bed pillows painted with imagery from people’s dreams. The images within the cases are subconscious reflections, dreams and nightmares, private and uncontrolled. This project is a collaboration with painter Erik Thor Sandberg. 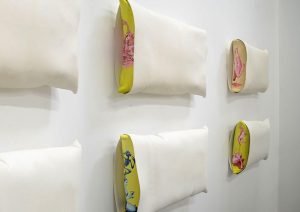 Born in Cleveland Heights, Ohio, Megan Van Wagoner grew up in a community filled with artists, musicians and lots of mid-west practicality. She majored in Ceramics at the Cleveland Institute of Art and completed an MFA in the Mount Royal School at the Maryland Institute College of Art. Her focus on mixed media sculpture and installation, along with her background in ceramics, forms the foundation of her current studio practice.

Megan is the recipient of a 2009 Maryland Arts Council Individual Artist Award. She lives and works in the Baltimore-Washington area. Her studio is in Hyattsville, Maryland at DC Glassworks and Sculpture Studios. She teaches art and design at Montgomery College in Silver Spring, Maryland.