On February 13 our program 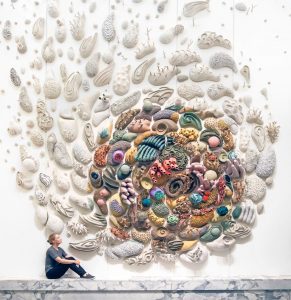 Courtney Mattison, a ceramic artist who will be speaking with us from her satellite studio in Boston. Courtney is an environmental artist with a background in marine ecology. She completed an interdisciplinary BA in Ceramic Sculpture and Marine Ecology at Skidmore College in 2008, which included coursework in Australia. While there she studied and explored the Great Barrier Reef. After graduating she spent a year as a fellow at the Harvard Ceramics Program before earning a Master of Arts in environmental studies at Brown University, completing half of her coursework at the Rhode Island School of Design in 2011.

This fusion of art and marine ecology is the mainstay of her ceramic work. She has been described as an “ocean advocate.” Her intricate, large-scale installations have been exhibited internationally.  She has received commissions from the Office of Art in Embassies and Lindblad Expeditions among others.

Courtney will speak to us about her ceramic work as it relates to environmental advocacy, and specifically about her recent exhibition at the Brandywine Museum of Art in Chadds Ford, PA, called “Fragile Earth: The Naturalist Impulse in Contemporary Art.”